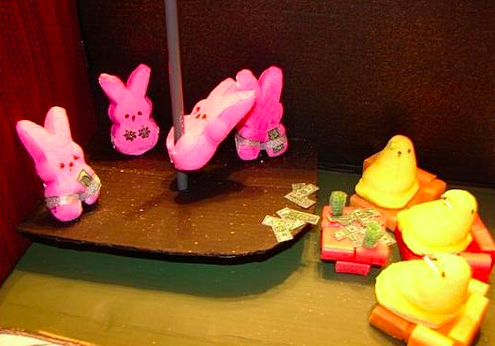 I’ve decided to try something different today. I’m feeling all kinds of risky, y’all. I’m thisclose to changing my clothes in front of a window when the shades are up. But, like, only on the second floor where no one’s apartment even remotely looks into ours, and not at the one window that sort of looks onto our neighbour’s yard. Mr. O’Reilly (assuming, given my location) can continue to pull weeds sans a peep show.

I’m not sure what’s brought on this sudden desire to, like, eat an apple without first washing it beneath boiling water? Maybe it’s because it’s Monday and I slept like a newborn atop 100,000 thread count sheets swaddled in mink. Maybe it’s because I’m getting hitched in a week and get to unload the cumbersome surname that perplexed a thousand waiters. Or maybe it’s because I lessened Ireland’s spider population by two just yesterday, and those bitches didn’t even put up a fight. They knew it was pointless, my aim is too good.

Whatever the reason, I’d like to go ahead and buck tradition today. Generally I like to share stories of my life after the fact, when it’s been several hours or even days since the incident. That amount of time allows me to process the events and, like, emerge all wise and stuff. And you often read said accounts all enamored with my wisdom. That’s our system, y’all. It works for us, but currently I’m mid-crisis and I’d like to share.

I’m witnessing what can only be described as a live brawl. If this were college I’d grab my Chinese throwing stars and nunchucks and tap myself into the game, but I’m civilized these days. Those brawling days are a thing of the past.

There are a couple of birds squawking at one another, and this shit is getting heated. It started almost like a mating call, I don’t speak this particular (unknown) variety of bird, but I would liken it to, “Hey, you’re cute. Want to come perch on my nest?”

It was pretty casual flirting, but the other bird was reticent from the start. Again, I’m taking some liberties here, but I assume she replied with, “No, thanks, my man just went off to get some worms for brekkie. He should be back soon.”

The other bird, not easily dissuaded, responded with a squawk like, “I only asked if you wanted to perch on my nest, chill the eff out, cocky. I wasn’t asking you to regurgitate your dinner for me.”

Now, this would have been an opportune moment for her to just quietly stop responding, allowing him to get the message and direct his attentions elsewhere. I could only get a glimpse through the slatted blinds on my window, but he wasn’t exactly an unfortunate looking bird. I’m sure he had plenty of game amongst his species, but I assume his ego was speaking out of turn here.

She squawked back something like, “Ok back off, I said he’ll be back soon. He’s very large, they call him ‘the falcon,'” a claim which, for some reason, seemed to tip the other bird over the edge.

It’s been, like, 5 solid minutes of heated squawking since that moment. I lost track of the conversation, but at one point the lady bird attempted to escape. I saw her fly across my skylight just a moment ago, seemingly signaling for help.

My question is, do I intervene? I don’t want to overstep here, since I could easily have misunderstood the context and maybe those two are actually the couple? I don’t really want to come between the drama of any couple, especially not the avian variety.