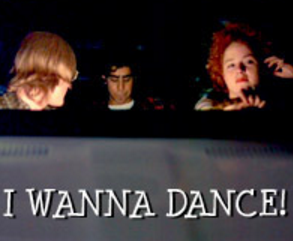 Remember that character in Dazed and Confused who is, like, fiercely opposed to machismo and tells that anecdote about how he decided against being a lawyer because he saw some rotund guy with his coin slot exposed and was all “nah, never mind, I don’t want to help people.” So then the redhead (whom McConaughey loved) was all “so what do you want to do with your life then?” and the character was like, “I want to dance!”

Well, I think that guy is a goddamn genius. His take on machismo was spot on. Did he actually usher in the era of the metrosexual? I think he may have. I mean, sure, he was whiny and irritating, but he made some solid observations. And he and I see eye to eye on one thing in particular – I, too, just want to dance.

To be clear, I don’t ever want to dance professionally, because among other more obvious reasons (lack of proper technique, lack of talent, seriously lopsided body) I don’t think my feet could handle the abuse. Well, they can, but my high heels have been doing such a solid job of it. I wouldn’t dream of replacing them; they’re up for tenure next year.

There’s something about being in a wide open space with a barre, music and preferably a class where I’m overqualified so I can be the star, that just makes me feel alive, you know? There’s nothing like it. In the absence of such, I can make do. Give me a vast open space and/or a multi-paneled mirror and I am recreating Swan-goddamn-Lake in that retail store.

I guess my question is, is there a market for this? I want to continue to perform as if the world is my stage, but is this legal? Like, surely I should be selling tickets and not just giving away the show, but I don’t have a small business license. I’m starting to worry I’m operating like those guys in Chinatown who sell the bootleg DVDs on blankets so they can easily swipe everything into a bundle when the cops show up, like “nothing to see here, just walking with my puffy bundle of perfectly legal contraband is all. Move right along.”

I wouldn’t know the first thing about putting together a business plan. I haven’t a clue of how to market this. Don’t even get me started on creating a catchy name for this venture. I have a well known proclivity for performing when the sun goes down, but I feel like “Lady of the Night” is already taken.

People, help me out. Am I crazy to think this could work? Or just crazy enough so that it might actually work?